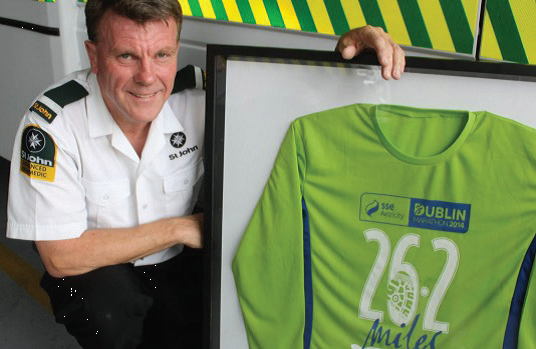 New Zealander Barry Eunson had just completed half of the marathon course (approx. 13 miles) when a young man collapsed in front of him. Initially, thinking the man had tripped, Eunson carried on. But his first aid training and experience made him turn around to check.

“I thought, ‘hang on, he didn’t trip, he collapsed’ and looking back saw that the collapsed runner was having a seizure. No-one else had stopped so I went back.”

Thankfully he did, as with a full crowd of 15,000 runners, St John Ambulance Ireland took some time to reach them. On arrival Eunson then was able to administer life saving drugs and use the equipment held on board. Additionally with the help of an advance care officer they put a life-pack cardiac monitor on him and Eunson was asked to travel in the back of the ambulance to the hospital. But as the ambulance was leaving, a French woman collapsed on the road and selflessly Eunson offered to stay with her until another ambulance arrived.

The delay in helping both casualties for over an hour-and-a-half, meant that unfortunately the Marathon race was over. However Eunson did not have any regrets “The really sad thing for me was the people were there all getting their t-shirts and medals. But a finishing medal versus the Irish man’s life — I made the right choice. No medal for me but a sense of caring that was appreciated by all.”

Thankfully on his return home, one of his friends contacted the Dublin Marathon organisers recounting Eunsons’ amazing charitable and lifesaving sacrifice and the story has a great happy ending as they did not only send a shirt and finishing medal, but also paid for a return flight to Dublin for Eunson to get a chance to finish the race this year in 2015.

The race director hopes to reunite Eunson with the man whose life he saved. Here’s wishing Eunson the best of success in his marathon training and to also to thank him sincerely for all that he did that day.