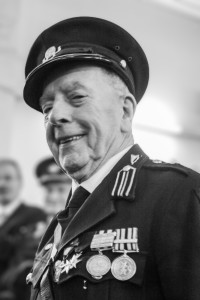 Indeed, it was in Noel’s honour that we inaugurated a 75 years’ service medal when Noel reached that milestone a few short years ago. Noel – or ‘Uncle Noel’ as so many of us knew him affectionately – was for many years a member of City of Dublin Division of St John. He rose to become its Superintendent, before he was eventually persuaded to accept promotion to National Headquarters staff. In that context, we may have taken Noel out of City of Dublin Division, but we never really took City of Dublin out of Noel.

Noel’s time with St John Ambulance was one of immense achievement across all aspects of our work. He was a prodigious ‘public duty man’, a ferociously competitive ‘competitions man’, with a huge amount of success to his name. He always sought to mentor and encourage the new members and our younger Cadet Members. He always sought to represent the interests of the rank and file members in his, very respectful, communications with a succession of Commissioners. His work within and on behalf of St John Ambulance Ireland was further recognised when Noel was invested as a Serving Brother of the Order of St John.

Noel is probably the last member of St John Ambulance Ireland who had memories of our founding Commissioner, Sir John Lumsden, who served until his death in 1944. In the few short words here, I cannot do justice to Noel’s achievements but they were many; Noel will be celebrated and fondly remembered by us all in St John in the days, weeks, months and years ahead.

Noel achieved all he did for St John with the steadfast support of his late wife Maura and his two children, Frank and Colette. For all the time and service he gave us, Noel still put family first and we remember Maura in particular at this time, as they are reunited in God’s presence. We offer our heart-felt condolences to Noel’s son Frank, daughter Colette and their respective families at this sad time.

Noel was the epitome of a man of his generation; generous to a fault with his time and energy, but carrying his immense achievements so very lightly.