Published 03/09/2016 | By eoin.pluinceid
Last night saw the beginning of another season for Leinster Rugby. That meant, of course, that St John Ambulance were on site from well before kick-off til after the crowds dispersed. After the long evening duty, members of North Kildare Division were returning their ambulance to its base in Celbridge when they were flagged down by a motorist. 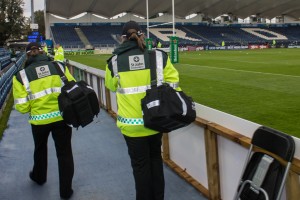 Having pulled in safely and assessing the scene, it was apparent that the motorist was bringing his wife – who was complaining of chest pain – to hospital.
After a brief assessment in the car, the patient was moved to the ambulance using a carry chair. Once on board the crew commenced a full diagnosis, which means assessing the patient’s pulse, breathing rate, blood sugar level, and asking about symptoms they’re experiencing. In addition to these, the EMT on board used a heart monitor (3-lead ECG) to assess the condition of the patient’s heart.
With all the information available to them, the crew established that the patient was not suffering from a heart attack. They made a decision not to call for additional support from the National Ambulance Service, rather to transport the patient to James Connolly Memorial Hospital in Blanchardstown. Once the patient, who was in good spirits & appeared to be in good health when they departed, had been handed over to hospital staff, the crew set out for home.
Wishing her a full and speedy recovery!
Posted in Ireland