It was a beautiful autumnal Sunday morning as Conor and I started the regular Divisional duty as members of St. John Ambulance at the ‘Belvo Minis’.

The Old Belvedere Mini Rugby programme is for boys and girls between the ages of 6 and 12 who want to learn to play Rugby. Matches and Training take place every Sunday morning during the season from 9am – 1pm.  There are eight head coaches organising and training the kids each Sunday morning. Each coach has been trained in First Aid.

The training starts at 9am for the 6 to 9 year olds. This morning from our position, we could hear the head coach calling out plays and demonstrating techniques, which would not be out of place in the RDS or the Aviva. 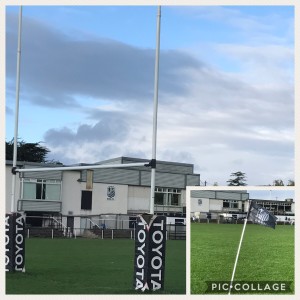 The Metropolitan League for under twelve’s started immediately after training.  Belvedere  were playing their arch rivals Clontarf in a series of round robin matches.  As we watched the future Jonny Sexton, Brian O’Driscoll or Ronan O’’Gara, inevitably the injuries started to occur. Perhaps because of the intensity of the games, we had more injuries than usual. We treated sprains, strains and dislocations.  The kids were wearing their injuries like badges of honour, as one of them tried to convince me that he was okay to play in the last match. After all, there were valuable points at stake. Clontarf put up a brave display, but Belvo were too strong on the day.

As First Aiders, we were happy that there were no serious injuries. The young stars of tomorrow headed towards the dressing rooms as we left the ground, happy in the knowledge that Foxrock Division had put in another strong performance at the Belvo Minis.