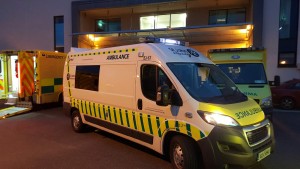 A 5 kilometre ocean race almost had a tragic outcome when a male swimmer was struck by hypothermia. He became unresponsive and was rescued from the water by Kinsale RNLI. After a succinct handover, the patient was stabilised on site by EMTs Sean & Barry. Under Garda escort, he was transported to Cork University Hospital.

En route, the National Ambulance Service advanced life support team met up with the ambulance & transferred a member of their team into the ambulance to support the life-saving work of the two St John Ambulance members.

We would like to thank all our colleagues in the RNLI, Gardai, and National Ambulance Service who, along with our crew, provided seamless professional care for our patient until his arrival in Cork University Hospital ED.

We would also like to take this opportunity to wish the patient well in his continued recovery. Well done to all involved in another example of patient centred co-operative care.