On Saturday, April 30th, Glanmire Division was happy to hold the official opening of its new divisional headquarters. The opening, as noted by Superintendent Gerard Doyle on the day, was the culmination of years of hard work and commitment by officers, NCOs, and members, since the division was founded in 2011. 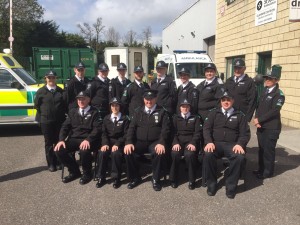 It will serve as a focal point for divisional training, meetings, the running of Glanmire’s popular bi-annual public first aid courses and provide a base for Glanmire Division’s ambulance.

Glanmire Division was delighted and honoured to welcome Commissioner John Hughes to the new premises, where he was met by a guard of honour consisting of both adult and cadet members. Commissioner Hughes was in attendance not just for the grand opening, but also to present newly promoted Cadet Officer Ashling Doyle with her Warrant of Office. 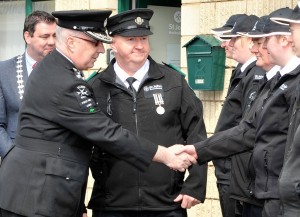 Commissioner Hughes also presented a number of volunteers with service medals, in recognition of their dedicated service over the past number of years. The members of Glanmire Division are very grateful to him for making the journey to their new home.

Commissioner Hughes praised the members of Glanmire Division, and thanked the local community for their support:

“I would like to congratulate all the Members of Glanmire Division on the establishment of their Division in 2011, and now the sourcing of a permanent base for the Division.

“In particular, I congratulate Supt Gerard Doyle and Cadet Officer Ashling Doyle for the leadership they are providing to the Senior and Cadet Divisions.

“I also wish to acknowledge the tremendous support of the local Glanmire community for St John Ambulance, since it is the Community at local, regional and national level that St John Ambulance exists to serve.”

Once the formalities of the day had concluded, the members and NCOs of the division presented Supt Doyle with a special award to thank him for his commitment and dedication to the division since its inception.

The members of Glanmire would like to thank fellow volunteers in both the Cork City and Limerick Divisions for attending, and also to An Garda Síochána who were represented. St John Ambulance continues to work closely with na Gardaí, both in the local community and at major events. The support of local businesses is critical to Glanmire Division’s continued success, and their attendance on Saturday was much appreciated.

With the opening of the new building, St John Ambulance is now firmly established in the Glanmire area. Our volunteers are always available to help the community with first aid & ambulance cover for events and first aid training. 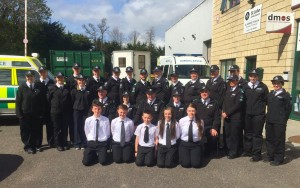 New members, both adult and cadet, are very welcome. Contact Glanmire Division by phone, email or pop down to their new home, located at Unit 5D, Glanmire Industrial Estate, Sallybrook.