Jospehine & Gerard Maher were anticipating a fun day out with their children, Charlie and Hannah, when they decided to attend the St Patrick’s Day Parade in Drogheda, last Thursday.

They never considered that Charlie might have a seizure and require hospitalisation. 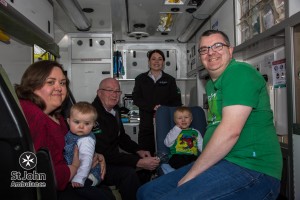 The Maher family with Shay & Jelena

While Josephine has always been aware of the presence of St John Ambulance in Drogheda, due to her neighbour’s involvement (in fact, he was driving the ambulance which brought Charlie to hospital), she never dreamed that her family might need the organisation’s services.

The day had started normally, and the family went to the parade early, in order to get a good spot. “Charlie was singing and dancing no bother and we were sitting down on the kerb and suddenly he just laid back it looked like he was looking up at the sky, then we realised he wasn’t responding” recalled Josephine.

Gerard and Josephine’s sister then lifted Charlie up, at which point his eyes rolled back in his head. 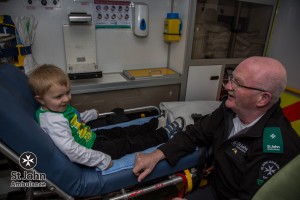 “I was shocked, it was very surreal, I didn’t even have time to think”. Thanks to Gerard’s quick thinking, and having been sitting at the front of the crowd, he was able to alert the passing St John Ambulance patrol. “We didn’t even have time to panic really, thankfully. It doesn’t bear thinking about what we would have done if St John hadn’t been on the scene at the moment he collapsed”.

Initially, Shane, Sean & Jelena (the ambulance crew) responded. As they were performing their primary assessment, Shay Power, the Advanced Paramedic on duty, arrived. He was accompanied in the Drogheda response car by Divisional Superintendent Colin Maher. 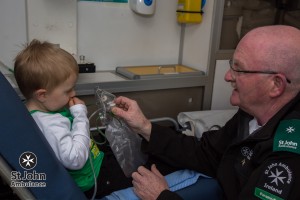 Shay joined St John Ambulance Ireland in 1978. As his interest in pre-hospital care grew, Shay joined the Dublin Fire Brigade eight years later, and hasn’t looked back since. He retired from the Fire Brigade in 2015, recently spending three months in Abu Dhabi consulting for the Ambulance Service there. He still dedicates himself to St John Ambulance, working as a District Officer, and is a regular attendee at events in Croke Park.

“We have seen an upsurge in interest in St John in recent years, lots of people want to give back to their communities. It’s very important it is to learn how to deal with emergencies, particularly at home and in work” said National Volunteer Coordinator Oliver Allen. 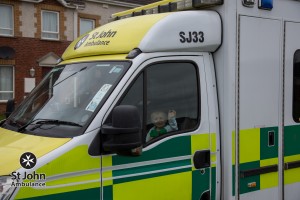 Charlie gets a lift in the front of the ambulance

“This is another example of how important it is to have trained pre-hospital personnel in communities around the country” said St John Ambulance Commissioner John Hughes.

Charlie was rushed to the nearby hospital, where he was looked after by the staff, and was released home later that evening. 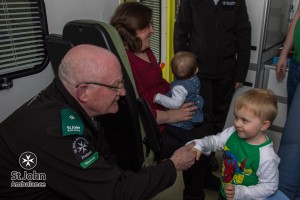 Charlie thanks Shay for his life-saving work