Holden Stodart was born in Blackrock, Co. Dublin in 1883. In the early 1900s the family moved to Stamer Street, a few years before the Easter Rising they moved to Northumberland Road Ballsbridge; both within walking distance from Dublin City. Holden studied at the High School in Rathgar. He started working as a clerk in Guinness’ brewery. Here he started volunteering with the St John Ambulance Brigade, being one of the first members of the organisation. 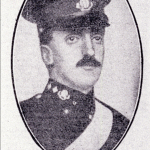 When the Easter Rising broke out on April 24th 1916, Stodart made the first move towards the organisation of first aid. He was in the city at the time and telephoned the military authorities offering help, which at the time was not required.

The following day, a military application was made for a number of men to act as orderlies with the Royal Army Medical Corps at Portobello Military Barracks and Dublin Castle Hospital. Many members rushed towards the city from various divisions. An ambulance patrol based out of Harcourt Street Railway Station also began operating.

On Wednesday morning, 26th of April, a number of officers and men reported to the Deputy Commissioner at the Depot, 51 Dawson Street, together with some members of the public possessing first aid certificates, who were anxious to help the Brigade.

On the same morning, The City of Dublin Hospital authorities made a room available for use by the St John Ambulance Brigade. Stodart was instructed to take charge of Baggot Street Hospital with a number of members until his arrival. While members of the St John Ambulance Brigade gathered and setup at The Royal City of Dublin Hospital at Baggot Street, nearby, The Sherwood Foresters, were resting at the RDS in Ballsbridge. The regiment had got off a ship that morning in Dun Laoghaire. The Sherwood Foresters Regiment was made up of young men with only a few weeks of training and some had not even fired a rifle.

Only a half a mile from Ballsbridge, a number of rebel volunteers under Lieutenant Mick Malone positioned themselves in some buildings, including The Schoolhouse, around Mount Street Bridge. This was a key crossing point in Dublin City. This strategic position was taken by Lieutenant Malone in order to prevent reinforcements from crossing the bridge.

The Sherwood Foresters received information that the Schoolhouse was occupied by rebels. The regiment made their way down towards Northumberland Road, where they walked into a bloody battle already underway. The street was lined with young men screaming, and bodies lined the road. There were over 160 dead and wounded, as mentioned in a letter to Dr. Lumsden by Colonel E.W. Maconchy 178th Sherwood Foresters Brigade, expressing “gratitude and appreciation of the work done by the St John Ambulance during and after the action in Northumberland Road on the 26th April.”
Supt. Stodart was shot near Northumberland Road, when he went with a stretcher party to treat a wounded soldier; the shot killed him instantly. His lifeless body was carried back to City of Dublin Hospital on Baggot Street. Members of St. John Ambulance continued to recover the wounded from the “bullet swept streets of Dublin, irrespective of sides” (words of Deputy Commissioner Dr. Lumsden)
District Superintendent Mr William G. Smith wrote;

“Here the Brigade sustained the loss of its most zealous and conscientious officer, Corps Superintendent Holden Stodart whilst proceeding with a stretcher party to the relief of a wounded soldier. His heroic death and noble example must be remembered amongst those who serve under that order whose motto is “Pro Utilitate Hominium”.” Smith personally expressed his hurt at Holden’s death as they were childhood friends.

In his own words:

“…the rest of that evening was a dreadful nightmare, which was only made a frightful reality by the dead, dying and wounded which began to stream in. I can never forget the dreadful wounds we had to look after that night, for as night fell, more and more wounded poured in and on every hand, the fighting got furious. The constant raffle of rifle fire, the sound of bombs exploding, a whole terrace of houses Clanwilliam Place, burning furiously, death and danger all round, made up a night of horror that one would wish to forget…”

Holden Stodart gave his life for his country and for the sacred cause of mercy. He was only 33; his death left his wife and 2-year-old daughter distraught. 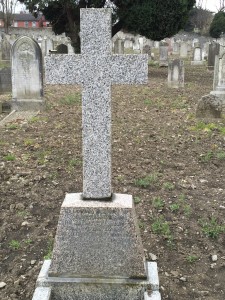 The members of the St John Ambulance Brigade received medals and certificates for meritorious service. There no was no provision for the award of posthumous honours, so the Brigade could not formally acknowledge Holden’s bravery. The War Office decided to place officers and members of the St John Ambulance Brigade in the same position with regard to pensions and compassionate allowances as the holders of equivalent ranks in the army.  The Stodart family was awarded the pension and allowance of a Lieutenant killed in action. He was also awarded the Silver Coronation Medal for his work with the Brigade since the Outbreak of the First World War. 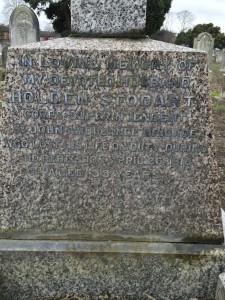 The inscription on Stodart’s grave

In Mount Jerome Cemetery, I found Holden Stodart’s grave. It took time to find as it is in an old part of the cemetery. 99 years later, it stands intact, with the engraving still visible.