Foxrock member’s were once again out in force to help support our local rugby club team’s on Friday 06/07/2017. This much anticipated match between De La Salle rugby club versus University College Dublin (UCD) rugby club was a highly speculated match as the winner would be one step closer to the final of the league. The local’s had been excitedly talking about the outcome for the last few weeks so we knew there would be a big turnout from the locals. Five Foxrock members ranging in abundance of skill and levels volunteered to help out at the duty and our EMT Equipped ambulance was mobilised to the match as an added bonus.

UCD took an early lead with two tries and scoring both conversions however the fight wasn’t gone from De La Salle as they managed to pull back a try before the half time whistle. By the half time break there had been a few knocks and bruises from some of the players and the coaches asked for these players to be assessed for injury. They were all check over by our team and were happy to carry on. The second half is where the real dogfight began. UCD scored a try first followed quickly by a try from De La Salle. They were neck and neck the whole way to the final whistle with UCD coming ahead 33 points to 31 points. 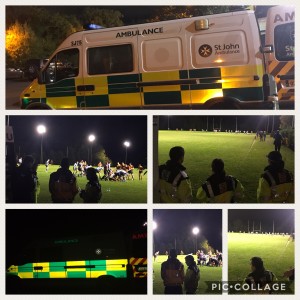 Thankfully no one was injured at this game however it’s important that we were available if needed. Foxrock knows that the local community value our training and help with first aid issues, should the need ever arise. We’ll all just have to wait and see what happens in the next one…..